Something you may not know about me is that I was adopted as a newborn.  I was less than an hour old when I was very lovingly given to a family.  All I know about my biological mother is that she was a college student, a heck of a singer, of Irish and Russian descent, apparently she bore startling resemblance to my mom, and loved me more than she loved herself.  As for my biological father, he was off the boat Irish, tall, athletic, and had the good grace to sign the adoptive paperwork.  My mom never kept it a secret that I was adopted, and that being adopted meant being loved by multiple families.  It is a gift beyond words. 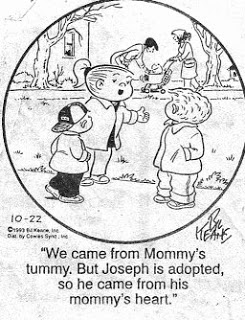 A cartoon that I sent to Joshua and his family.

You may ask why I have my adoption on the brain.  It’s because I have another adoption rattling through my head right now.  Joshua.  Now, Joshua is not the name that his parents gave him, but it’s the one I gave him when he was born.

I was 18 years old, a freshman in college, and barely able to care for myself.  I got pregnant, and from the moment that test showed positive I knew what my choice was.  I would carry that baby to full term, sign his papers, and hand him over to the attorney for the family.  It sounds so easy when you put it that way!!  It is not easy, in any way.

First off, I had to deal with a certain stigma associated with being an 18 year-old pregnant college student.  Not the easiest thing to deal with.  Then, there are the crazy food cravings, the hormones, and don’t forget the ever changing physique.  My boobs hurt, I developed stretch marks, and I gained SO MUCH WEIGHT.  I actually didn’t gain that much weight until I headed home for the summer, where I had no entertainment or transport from my country home.  I could have gone walking, biking, or swimming…but I didn’t.  I sat on my ever expanding butt, and ate.  And ate.  And ate.  And felt very sorry for myself, so I ate some more.  Seventy-two pounds later, I was at 38 weeks, and scheduled to be induced.

August 11, 1997 – I check in to the hospital at 6 o’clock in the morning, and go through the hour long intake.  I get my IV started, and at about 9 o’clock the Pitocin drip starts.  At 11ish I have my first contraction, and I have my epidural placed at noon.  Come 2:30pm, I feel like I need to poop.  Know what that means?  It’s time to push!  So I do.  For 35 minutes, I push when I feel the need, and out flies a tiny and beautiful baby boy into the doctor’s barely waiting arms.  Yup.  She literally caught the baby.  And he was whisked out of the room without me even seeing him.

About 5 hours later, my friend pushes me to the nursery where I look at this teeny tiny baby.  I don’t touch him, or hold him.  I just hang over the bassinet and talk to him for about 15 minutes, letting him know how much I love him.  And I did.  And I do.  He was just perfect.  And all I wanted (and still want) for him is,  the whole world.  A world I didn’t feel like I could give him.  I never really understood what heartbreak felt like until that moment.  My heart ripped in two pieces, and it never fully came back together.  However, it is extremely important for you to know that I have never regretted my decision.

Though the next year was a horror show of emotional torment (for me and for all the people who had to witness an immature child wallowing in her own self-pity), I came through it.  More so, so did Joshua.  His parents sent me a lovely letter, full of pictures of this blossoming beautiful boy.  They sent me some pictures at his first birthday, at his second, and again at his eighth.  I have a photo album full of pictures of a child I never held, but never stopped thinking of, or loving.

Last year, on his sixteenth birthday, I did a search on Facebook.  All I knew was his first name, and the city of his birth.  And I found him!  I have not friended him, and I will not ever contact him or his family, but being able to see pictures has given me great joy.  I know just a little information about him, and it makes me glow with even more joy.  He is flourishing!  And my thoughts that he would have access to opportunities that I would not be able to offer him was absolutely true.  He’s smart, accomplished, and athletic.  He had the genetic base, but his parents brought it to light.

Since having H, I am even more sure of the decision I made with Joshua.  H has run me ragged, and trying to take care of a precocious infant at the age of 18?  I don’t know what the outcome would have been.  So I am fully aware that I made the right decision for me.

Now, this piece may not have been an emotional read for you, but I’ve got tears staining my cheeks as I write it.  I haven’t mentioned that I was in a friend’s house in Florida when I first felt Joshua move, or that the boy loved to do flips when I was in the bath or headed to sleep, or that I had a great mom who supported me the whole pregnancy, or that I had great friends who kept me entertained and made me feel loved the whole time.  All these little moments are mine and Joshua’s.  And in eight days he turns 17.  And I’m so proud of him.  And I’m so happy for him and his family.  And every year, on his birthday I have a little cry that is bittersweet.  I gave the greatest gift in the world to two wonderful parents, and helped launch a happy family.  I understand better, the choice my biological mother made.  I understand the sadness and the joy.  No regrets.

One response to “Adoption, It’s One Heck of A Gift”